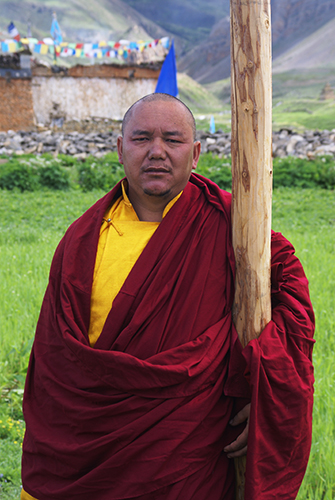 Khenpo Pema Dorje Rinpoche’s Biography Khenpo Pema Dorje Rinpoche started the Dolpo Tulku Charitable Foundation (DTCF) together with Dolpo Tulku Rinpoche in 2008, which was recognized as charitable by the Nepalese government in 2010. He was born in Dolpo, Nepal, in 1971. At the age of six years he joined Shelri Monastery in Dolpo, receiving refuge and his Dharma name ‘Pema Dorje’ from Shelri Choktrul Rinpoche.

At the age of 18 he joined the Ngagyur Nyingma Institute in South India, part of Namdroling Monastery, under the auspices of HH Penor Rinpoche, where he studied a wide range of Sutra and Tantra scriptures . There he started to join forces with Dolpo Tulku Rinpoche, also a student of the monastic university, to help their home region. Khenpo Pema Dorje’s life tasks:

1) Spreading the Buddhist teachings: He was enthroned as the first Khenpo from the Dolpo area in 2003 at Namdroling Monastery. Since 2007, as directed by Margom Rinpoche, Khenpo has been visiting the Thosamgom Buddhist Centre in Taipei, Taiwan, and is also teaching Buddhism throughout the region and in other countries.

2) Charitable projects in Khenpo’s native region Dolpo: Since the stat of the DTCF Khenpo has rebuilt and renovated old monasteries; set up a teaching facility and constructed a primary school. Also he gathers support for all the other projects of the DTCF like health projects.

Khenpo welcomes all Dharma brothers and sisters to contact him for Buddhist teachings and to join him in his efforts to implement his ongoing projects. Contact: khenpopedor@yahoo.com